Dr. Vina Tirven-Gadum has been teaching French language and Literature courses at Athabasca University since July 2003. She has a Doctorate in French Literature and specializes in the 20th Century and the early 21st Century French novel. Her main area of research is in the field of Authorship Attribution to contested and pseudonymous texts; she tests the hypothesis that style is dictated by the subconscious and forms the “genetic” fingerprint of the writer’s work. Applying standard authorship attribution methods, she evaluates the reliability of this concept in light of the pseudonymous works of Romain Gary. This kind of analysis requires a solid knowledge of traditional methods of literary analysis, a good knowledge of Statistics and Stylistics, knowledge of Linguistics and of computer technology. She is now analyzing the pseudonymous writings of the Russo-French author Andreii Makine/Gabriel Osmonde, using the same methodology.

She is also interested in 19th Century French Literature (poetry, novel, and theatre), French literature of the middle Ages, the 17th and the 18th Centuries, as well as the writings of Francophone writers outside France. For the past few years she has been exploring the writings of Ananda Devi and Nathacha Appanah, two modern Francophone women writers from L’Ile Maurice (Mauritius).

Before coming to Athabasca University, Dr. Vina Tirven-Gadum taught French – Literature courses as well as Grammar and Writing courses – at the two main universities in Winnipeg, Manitoba. She also taught advanced Translation courses at the Université de Saint-Boniface (The University of Manitoba’s French campus). She has taught at the Alliance française du Manitoba, the Federal Government Language School in Winnipeg, and at the Department of National Defence.

Since her arrival at Athabasca University, she has been developing French Literature courses, and to revise many language and writing courses, in order to bring those more in line with current pedagogical practices and expectations.

“Jean Sablon: French crooner and ambassador of French songs in the US before and after the Great world wars” in French Music edited by Dr Michaël Abecassis (University of Oxford): submitted

“The Life and Works of Alexandre Dumas – père” The Literary Encyclopaedia (www.litencyc.com): September 2010

“Two methods of Author Identification” at the ALC/ACH Conference in Bergen in 1996. 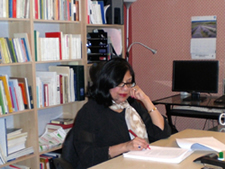